Google India has rolled out a brand new feature for its local users which allows them to switch between English and Hindi in their search results. The tool is the latest offering to be launched by the tech giant in its efforts to better engage with its user base here.

The new feature places two tabs beneath the search bar, with one displaying search results in English and the other in Hindi. In a blog post, Google says it came up with the idea in order to reflect how Indians alternate between different languages in their day-to-day interactions depending on the audience or situation. 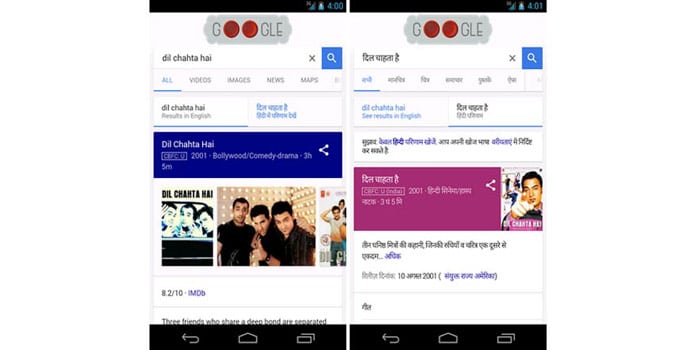 In that light, Google thinks that searching for information should be as simple as a going from one tab to another within the same window. From now onwards, if a person types a word like ‘samachar’ in English they’ll get to select which language they would prefer to see the answer to that query in.

Google consumers will also be able to seek out more complex questions like ‘Dhoni ka janam din kab hai?’ and information about Bollywood movies like ‘Dil Chahta Hai.’ Even health-related questions will be answered under this new format, a useful feature for the millions who use it to input English words like Diabetes but want their inquiry answered in Hindi.

Google is making the new tab search tool available in states with major Hindi-speaking populations including Chattisgarh, West Bengal, Bihar, Jharkhand, Haryana, Madhya Pradesh, Himachal Pradesh, Rajasthan, Uttarakhand, and Delhi. It’ll be open to both Android and iOS users for most browsers except for Opera Mini and UCBrowser.