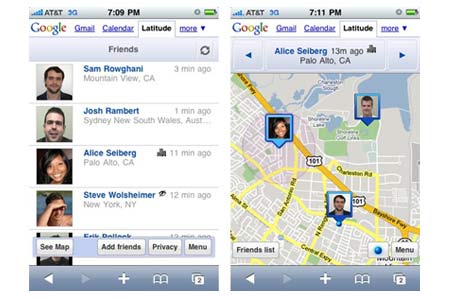 According to IntoMobile, Google has recently launched the Latitude application for the iPhone. This service enables users to track their friends’ movements provided their friends have this service running on their iPhones and allow users to track their movements. The Latitude application has been available for BlackBerry and Android users for a long time now. This new application from Google gives insight into the possible future of smartphone apps from the company.

Latitude from Google for the iPhone is a browser-based web application as opposed to the standalone Google Latitude applications on the BlackBerry and Android smartphones. Google decided to develop a web-app that works exclusively for the iPhone Safari browser as they believe that the future of mobile application is the web-app. They have in effect displayed that mobile app developers do not require the App Store. Moreover, Apple has made the iPhone APIs available to enable web services to tap into the device’s hardware.

Therefore, the real reason why Google has released the Latitude application as a web-app maybe because of Apple.