Carrier billing has finally arrived for the Google Play Store in India, with the company choosing to partner with Idea for its maiden venture. It’ll probably expand the service to other telecom operators soon.

In a blog post, Google says this is the first time it’s offering direct carrier billing in India. The scheme basically allows users to pay for apps, in-app purchases, games, movies and books through their Idea account. It should prove to be a welcome relief for the many who don’t want to go through the hassle of entering their debit or credit card details to buy something in the Play Store. 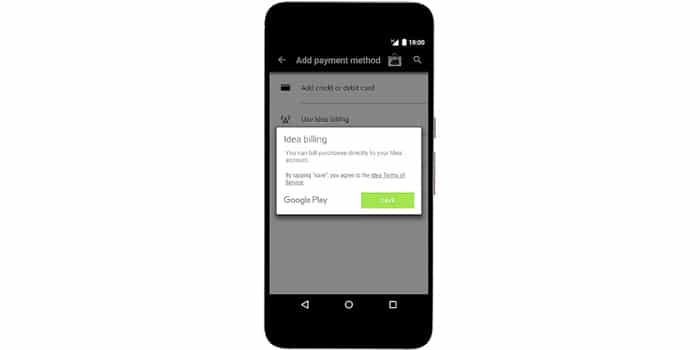 That’s not to mention the large number of Android consumers in India who don’t even own a credit or debit card. While cheap handsets have now become commonplace across the nation, many first-time handset smartphone users are reluctant to actually pour money into an app even if it costs just Rs 10.

The new direct carrier billing plan may just encourage them to give it a try. However, it does come with a convenience charge which totals Rs 1.50 for a product worth Rs 10. If that doesn’t deter users, they can now go ahead and pay for apps by choosing Use Idea billing in the payment method section.

Both prepaid and postpaid users can take advantage of the service. Google plans to deduct the amount from the former’s balance with Idea, while it’ll add the sum to the latter’s bill under a new segment titled Google Play purchases.