Google recently filed a patent for the kind of creepy toy that parents may not want around their kids even if it can be a useful way to keep an eye on them. According to the drawings submitted as part of the application, the toy may come in different forms such as a teddy bear or a rabbit. It will be fitted with various sensors as well as cameras, speakers, microphones and motors.

Likely to haunt the nightmares of kids and adults alike, the toy might run on the Brillo OS. The software is supposed to be based on Android and is targeted towards the Internet of Things (IoT). It is rumored to support extremely low-power devices with even 64GB or 32GB RAM. There’s no mistaking the fact that Google intends for its latest creepy ‘plaything’ to be one for the IoT scenario where connected devices in smart homes interact with each other without human intervention. 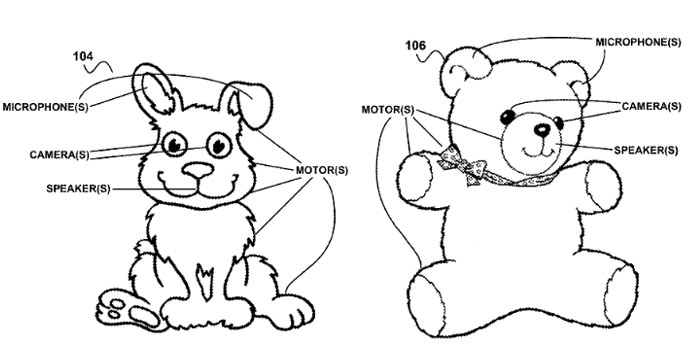 Described in the newly filed patent as an anthropomorphic device, the toy may be able to control network-enabled objects like smart light bulbs, television sets, music systems, thermostats and what not. It is supposedly designed to interact with human beings ‘socially’ too. Capable of connecting to the Internet, Google’s unsettling device may be able to change expressions, listen for commands and execute them, record conversations or video and much more.

Also see: Google working on Brillo, an Android-based OS for Internet of Things

Google thinks it can simplify the management and control of various appliances or systems around the home, with the help of its toy that simulates human interaction. There soon won’t be any need to hunt for your universal remote control. All you’ll have to do is shout the name (or another assigned command to attention) of your creepy bear and it’ll be at your side to do your bidding, if it doesn’t ‘get you’ first.