Google has been up to its usual business of celebrating important events and people with a new doodle of Frenchman André-Jacques Garnerin’s, parachute jump. And October 22 marks the 216th anniversary of mankind’s first leap of faith with nothing but the intervention of a parachute.

The doodle designed by the quirky folks atop Mountain View, is an interactive, playable one in the form of a skydiving game. It’s not as addictive as the piñata doodle Google had put up to celebrate its 15th birthday, but it is fun anyway. 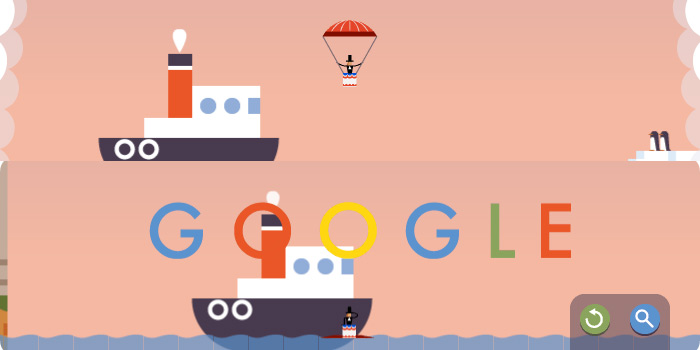 The game simply asks you to help the famous Frenchman steer his parachute as he descends through clouds and dodges bird ‘pellets’ while attempting to land safely. Don’t worry if you fail to help Garnerin reach his goal. You didn’t kill him, a wooden beam did in 1823.

For those who don’t know, the Google.com landing page doesn’t always show only the search bar with the company’s logo above it. On special occasions like the birthdays of famous scientists, Halloween, Children’s Day and so on, the logo gets an artistic twist.

Sometimes, it’s a playable game. In other instances, it’s simply an interactive video such as the one which was made to commemorate bacteriologist Julius Richard Petri’s 160th birthday on May 31, 2013. You can also buy coffee mugs, T-shirts, skateboards, stamps and more printed with your favorite doodle by hitting this link.

Now only if someone would pay us to doodle. All we remember of our creative and carefree doodling days in school are sharp raps on the knuckle for scribbling in the margins of our textbooks.