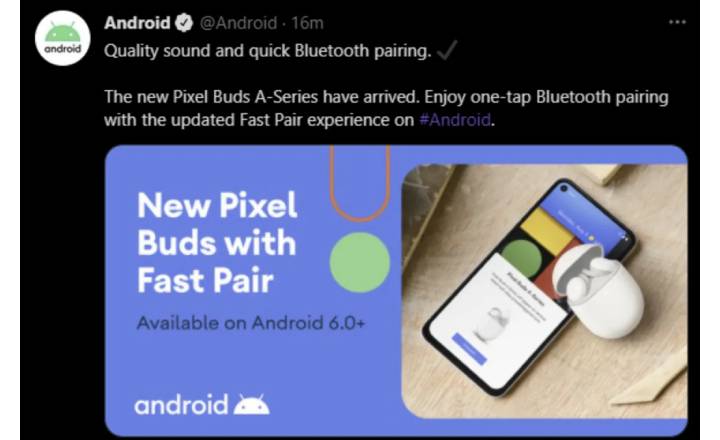 The updated Pixel Buds have been in the rumor mills for quite some time now and Google has finally given us a glimpse of them, albeit unwittingly. A tweet coming from the official Android account revealed the Pixel Buds A-Series earbuds but was quickly taken down, suggesting that it was a scheduled tweet that jumped the gun a little. Google I/O is likely the event when the earbuds will be unveiled officially, but we have managed to snag some details thanks to this gaffe.

First is the fact that the Google Pixel Buds A-Series will support the new Fast Pair technology, which automatically discovers Bluetooth accessories in close proximity to let you connect to them with a simple tap. It serves up the accessory’s product image and name in a large pop-up window, just like an iPhone does with the AirPods. Fast Pair associates that product with your Google account, so the pairing is retained even when you switch phones.

The tweet did not mention any price for the Pixel Buds A-series, but the ‘A’ in its name does suggest that it will be a more affordable option than the $179 pair available today. They grab a similar design to the said earbuds, but the black color has been replaced by a grey hue. Evidence of a forest green option has also been spotted in the wild.

Their expectedly lower price might mean some compromises in the features department. While ‘quality sound’ has been highlighted as one of its features in the tweet, we could expect something like the swipe volume gesture being excluded from the A-Series.

The Google I/O keynote is scheduled for May 18, so that’s when you’ll probably get to know more about the Google Pixel Buds A-Series. The event could also see the launch of the Pixel 5a 5G, which will unfortunately only be sold in the US and Japan.