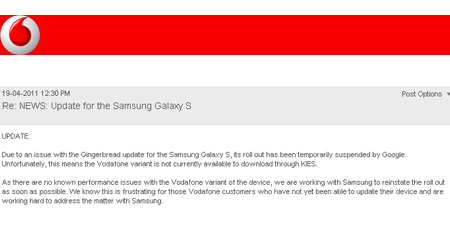 Over the weekend, Vodafone announced the availability of Gingerbread upgrade for its Samsung Galaxy S users via the Kies application. Now, According to Vodafone eForum, Google has temporarily halted the official Android 2.3 or Gingerbread update for Galaxy S smartphone owners.

The imminent delivery of Gingerbread for Samsung Galaxy S has been suspended due to certain undisclosed issues after the public release by Google. Taking this into account, even the Vodafone variants are not applicable to download the highly anticipated update through Kies.

The service provider however further asserts that its Galaxy S models are not affected and they are working closely with Samsung to restore the unleashing of Android 2.3 update. No other official details were revealed by Samsung, Google or Vodafone regarding this delay.

All Galaxy S handset owners can do now is only hope that Samsung and Google fix this transitory problem and get the update back on track as soon as possible.