Considering it’s a phone that is available in limited numbers, the OnePlus 2 tries to fling itself at fans quite earnestly, its next attempt being an open sale on October 12 which will see it going up for grabs to buyers without an invite for one hour. Before this, 1000 invitations for the smartphone were being distributed as part of a joint promotion with AirAsia. Even mobile operator Bharti Airtel, had partnered with OnePlus in September to offer potential customers a hands-on experience with the device and a chance to win the ‘golden ticket’ to purchase it.

On October 12 next week, the OnePlus 2 will be on sale between 12pm and 1pm in India. In the rest of Asia, Europe and the US, the same will take place at 12pm to 13pm HKT, 12pm to 13pm CEST and 12pm to 13pm PDT​, in that order. Since a lot of people are likely to try and drop this unfairly dubbed ‘2016 flagship killer’ into their shopping cart at the appointed hour, buyers can expect some technical glitches or processing delays to occur. 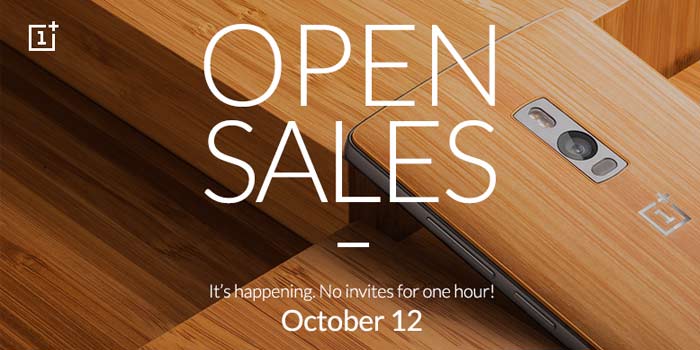 Those who get an invite after placing an order can take a shortcut to checking it out by canceling the unit picked through the open sale and then booking one again with the invitation at hand. OnePlus is keeping it to 2 phones per checkout. But the same customer can go back repeatedly and lay their paws on as many pieces as they want to during the hour-long promotion.

Apparently, the sale is a way of apologizing to fans who are annoyed that snagging a OnePlus 2 is just as hard as it was with the previous iteration of the handset. Amazon India is selling the 64GB device for Rs 24999.

Specifications of the OnePlus 2 at a glance: