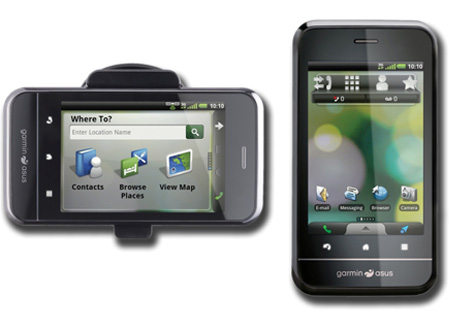 Recently, Garmin slid the covers of the new Garminphone that claimed to have no hints of the Garmin-Asus brand. Here’s a tidbit that should excite those waiting to hear of something from the Garmin-Asus co-branded alliance. The Garmin-Asus A10 Android smartphone bundled with Garmin navigation presents users in Europe and Asia-Pacific with pedestrian friendly attributes.

Users who believe that walking is the best way to traverse could take maximum advantage of this new phone. It’s bright, 3.2-inch HVGA touch screen is accompanied by an electronic compass and long-lasting 1500mAh battery suiting the needs of city navigation. Keeping to the Garmin-Asus Android-powered phone lineage, this handset too has been optimized to proffer an advanced location and navigation experience.

Preloaded with detailed maps, the phone eliminates the need to download third party maps, enabling them to make the most out of their turn-by-turn, voice-prompted navigation. Besides supporting pedestrian navigation to the best of its ability, this smartphone is also prepped up for use in an automobile and that too straight out-of-the-box. It’s supplemented with a powered audio mount that augments the volume of its voice commands.

Integrated with Google Mobile Services, users gain one-click access to Google Maps, Gmail, YouTube, calendar, contacts and the Android Market. The phone’s enhanced GPS capability can also be used by Android applications that include location-centric content. Compatible with Microsoft Exchange server, the handset allows users to set up their account setup in a quick and easy manner.

In addition to this, the smartphone also wraps in a powerful WebKit browser with multi-touch and a 5 mega-pixel camera including auto-focus capability that automatically geotags images. A built-in accelerometer is also onboard while users can look forward to optional cityXplorer maps support as well.

The Garmin-Asus A10 is scheduled to be available in mid-2010 in Europe and Asia-Pacific. Its price is under wraps as of now.