Even with 60000 units of the Xiaomi Redmi 1S going up for grabs through Flipkart this week, it took just mere seconds for the flash sale to end. According to the official figure from the OEM, the entire inventory went out of stock in just 5.2 seconds which isn’t surprising at all.

This isn’t the fastest sale we’ve seen for the Xiaomi Redmi 1S in India, but it shows that there still is a lot of demand for the smartphone. Based on the number of devices which have been put up for grabs through Flipkart since September 2, we estimate that a total of 180000 units have been sold so far. 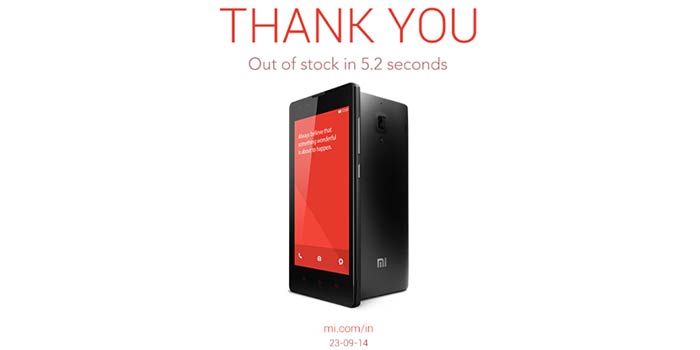 Next stock of the Redmi 1S handset will reach Flipkart on September 30, next Tuesday, and we expect to see another round of 60000 units being made available. For reminder’s sake, you’ll have to sign up once again for the sale and registrations will open in an hour.

If you didn’t manage to get your hands on the Xiaomi Redmi 1S in the recent Flipkart sale or planning to do so next week, head over to this link to register if you haven’t already. You might also want to take a look at the Salora Arya Z2 which is a new player in the market, but offers a bang for every buck like the phone in question.