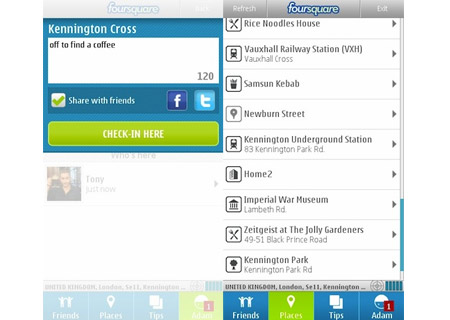 For Nokia users who love checking-in, Foursquare has rolled out a new update to its application for Symbian devices. According to the official Nokia blog, those with the old software will have to upgrade to continue utilizing the service due to changes made on how it operates.

Besides support to the new version 2 API, a crucial feature, no new functions are added to the application. In fact, the company has made no changes to the software at all. The company also states to be working continuously to improve Foursquare and introduce new abilities.

Ovi Community Manager Surya, on a blog post commented, “We want to bring a pretty important piece of information for you. Foursquare is having some changes to its API, which will mean that those of us using Symbian v3 & v5 edition and Symbian^3 phones will not be able to use the current client to check-in from August 1st – which means all our mayorships are up for grabs!”

Due to changes made to the Foursquare API, service to the old version will be discontinued starting August 1. Which means users on s60 v3, v5 and Synbian^3 will have no choice but to download the new Foursquare release. Additionally, the s40 application will feature no update, as it’s already compatible with the version 2 API.

Foursquare users on Nokia devices such as s60v3, v5 and Symbian^3 can download the new version of the application from the Ovi Store.