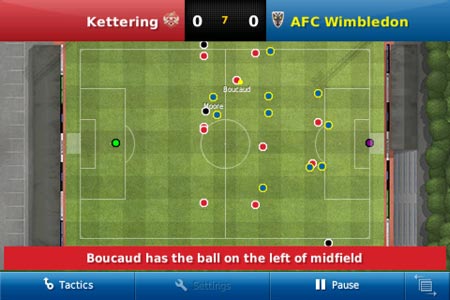 As football leagues around the world wind up for a Christmas break, Sega has unfurled some active action for iPhone owners. In collaboration with Sports Interactive, the company recently released Football Manager Handheld 2011 for the Apple device. A new iteration in the Football Manager franchise, this iteration has been packed with 29 leagues from around 11 countries across the globe.

In the game, players can take command of diverse on and off the field activities including the management of squad transfers and planning tactical gameplay. They will also hold the ability to send out instructions while footballers dribble the ball in the midst of a match. This makes it possible for gamers to direct the course of the match, crafting a victorious path for their team.

Miles Jacobson, Studio Director at Sports Interactive, elucidated, “We were really pleased with the reaction for the first iPhone release with players and press. With the new version of the game we have raised the bar for the management game genre on the iPhone even higher. With the addition of the stadium finder app too, we’ve also given all players in England the easiest way yet to find out how to get to the stadium on match days, giving them more time to play the game, and will be updating the service to include support for other countries stadiums too during the season.”

This new chapter in the series enables iPhone owners to assign each player with a specific task on the pitch. To exercise greater control over the match, they can further elicit help from the in-game tutorial guide. Lastly, this title comes with an integrated app which guides their route towards real-life stadiums while they head for a genuine match.