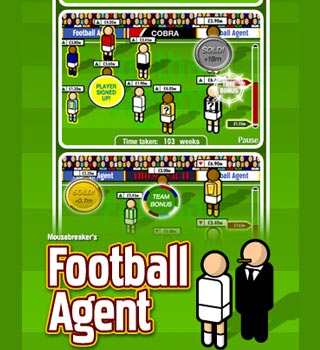 Here’s a news that should get football enthusiasts excited. With the excitement of the FIFA World Cup getting closer, Cobra Mobile launched Football Agent for iPhone and iPod touch users. This simple game allows users to earn millions as a football agent in a very short span of time.

Keeping to the name, this game involves buying and selling of players, enabling users to make a huge amount of money. 200 weeks that is 200 seconds in the game are allotted as a time period for the achievement of goals. High scores are highlighted through the Facebook Connect integration for Facebook friends.

Scores are added on the leader board at the end of the game. Users can beat the score they had achieved previously by giving a huge amount of replay value. The addicting game has players with different symbols on their shirts. With ‘Potential superstar’ as one of the names increases the star players value very quickly while the value of players decreases with ‘potential trouble’ as the symbol.

Controls are made easy for buying and selling of players as users simply have to tap on them. The background has colors which are eye-catching and vivid, giving a feel of the football field. Square shaped like graphics make the game more enjoyable and the music theme is simple with sound effects being heard while buying and selling of players. The game should add to the enthusiasm of football lovers.

Football Agent is available at a price of $0.99 through the App store.