If you’re looking to ditch your old smartphone and go for the 2nd gen Motorola Moto X, you might want to avoid selling off your current handset. Flipkart which is the exclusive retailer for the device in question, is offering up to Rs 6000 off on the flagship phone in exchange for your aged piece of hardware.

The new Motorola Moto X is currently listed for Rs 31999 which is its full retail price. And with the exchange offer, you’ll be able to get the device for as low as Rs 25999. Just so you know, not all brands are being accepted and the discount can vary based on which handset you plan to trade-in. 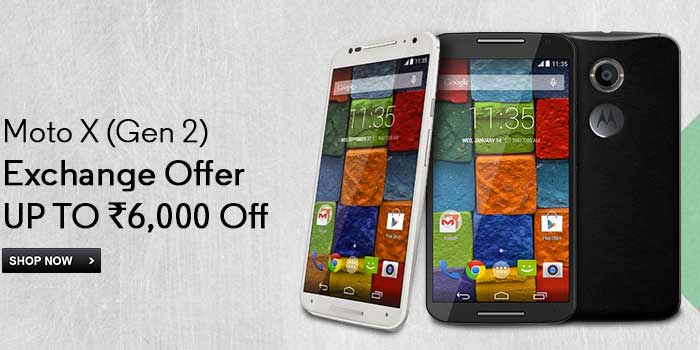 Currently, brands such as Apple, Alcatel, BlackBerry, Asus, HTC, Huawei, Karbonn, LG, Lava, Lenovo, Mi (Xiaomi), Motorola, Micromax, Nokia, Samsung, Xolo and Sony (including previous Ericsson phones), are being accepted. You might also want to check whether the promo is valid in your location.

The new Moto X has already started receiving an update to Android 5.0 Lollipop in the US and Indian handsets should be getting the new OS pretty soon. The phone comes with pretty beefy specs and various great features, but has one major downside which is its battery that’s of a mere 2300mAh capacity.

Here’s an overview of the Motorola Moto X’s key specs:

To purchase the Motorola Moto X second gen with or without the exchange offer, head over to this link.