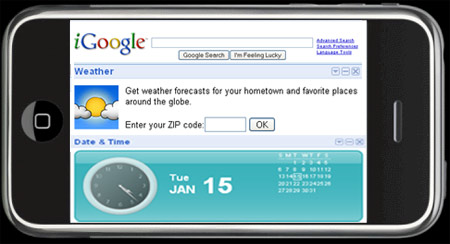 Google has announced new enhancements to the integrated Google experience on the Apple iPhone. The earlier version which was launched just over a month ago, offers web applications like Search, Gmail, Calendar, Reader and more. Now, the interface allows users to access the applications much faster and easier along with improved usability.

This Google interface was announced at Macworld. The improvements announced include:

iPhone users will also be able to customize their iGoogle page on their computer at www.igoogle.com.