Feel a craving for a bowl of rice to go with your stir-fried chicken and veggies? That’s probably not a great idea if you’re in Asia considering the new reports of fake plastic rice which have started going around once again. Apparently, the source of this ‘manufactured’ grain is none other than China itself.

The fake rice is supposedly made of sweet potatoes, regular potatoes and synthetic resin, and then molded into shape. You’d imagine it’d be easier and cheaper to just grow and sell the real thing, right? Plastic resin is not meant to be consumed and will create problems in the digestive system, even though it’s not instantly poisonous when ingested in minute quantities. 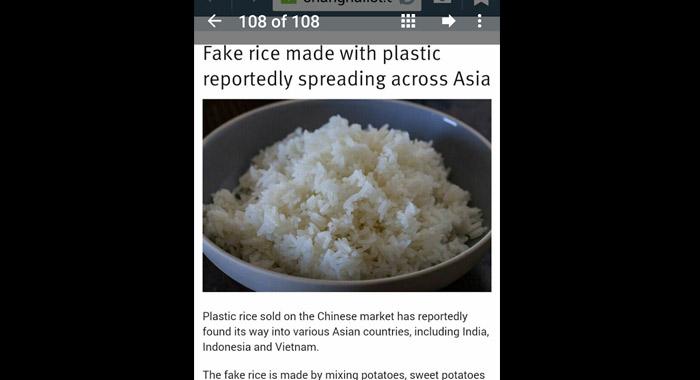 The manufactured rice is said to have invaded largely rural countries like India, Vietnam, Indonesia and Malaysia. It may have entered Singapore too recently. AsiaOne Soshoik News alleges that the product is ‘commonly sold’ in markets across China. Malaysian Minister Datuk Seri Hasan Malek has yet to confirm the veracity of the story, but promises an investigation into the matter.

Malek says that Malaysia’s strict regulations would make it hard for such spurious produce to enter the country. At the same time, it can reach small shops if it’s being smuggled across the borders. Suppliers may also be able to pass detection by mixing the synthetic grains with real rice. So how do you tell if you’re eating plastic rice or not? It seemingly remains hard even after being cooked.

Even for those who don’t put much stock in content circulating on social media and a couple of reports, it’s not easy to wave off such stories about a country that gave us the Chinese milk scandal of 2008. It affected 300,000 people and had the World Health Organization (WHO) labeling it as one of the largest food safety events in recent times. India is not far behind on such scams either.

In the year 2013, it emerged that well over 70 percent of milk sold in India contained water (to dilute and increase quantity), caustic soda, skimmed milk powder, paint, sugar, urea (for preservation), detergent hydrogen peroxide, glucose, starch, salt and vegetable fat. And the Food Safety and Standards Authority of India (FSSAI) was seen to be doing nothing about it.

As for the plastic rice, even Indonesian authorities have started cracking down on it. According to The Jarkarta Globe, a raid on a store at the Mutiara Gading market in Bekasi discovered it to be selling the fake rice mixed with real grains. So watch what you put in your mouth, OK?