Talk about weird app names, and Facebook’s ‘Phone’ app could come right on top in that list, even as the new dialer app prepares for deployment to the general public. This particular service is in its testing phases right now, and hence, very little is known about it.

Facebook has this habit of naming its own apps after default Android apps to increase the chances of users tapping on them. And under this rule, there couldn’t have been a better name for its dialer app than ‘Phone’ itself. The company is so committed to this idea that the icon of this app also appears to resemble that of the default Android calling app. 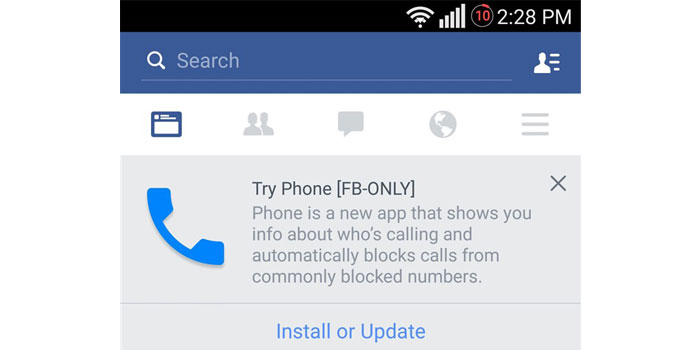 According to Android Police, this service is something that the social networking giant is testing internally right now. However, as is often the case, it has accidentally leaked out, and notifications to download it have reached a small amount of people apparently.

Clicking on them takes you to a ‘no page found’ error which further indicates that the app is not supposed to be in the public domain yet. Judging by the description which is accompanying the app’s notification, it’s going to feature a caller ID service as well, which is bad news for Truecaller, we guess.

Apart from getting details about the person who’s calling you, you’ll also be provided with the ability to block numbers. Additionally, the app will block commonly blocked numbers for you as well.

There’s no official word on when the Facebook ‘Phone’ app will officially be made available for Android devices. We’ll have more on it when additional details are out.