We’re not all for PDA of any kind and Facebook’s freshly introduced ‘Say Thanks’ video option frankly doesn’t do anything for us. The new feature on the social networking website has been unveiled with the ability to create a custom video meant to say thank you to anyone from your list of friends.

Accessible through the web as well as mobile versions of Facebook, this tool will begin its worldwide roll-out today, and we can confirm that it’s already available in India. English, French, German, Indonesian, Italian, Portuguese, Spanish and Turkish are the supported languages at the moment. 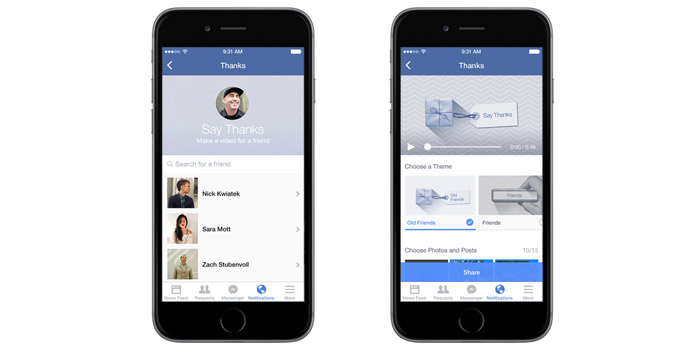 ‘Say Thanks’ works in a pretty simple manner – all you need to do is visit this link while signed into your account. You will then need to choose the exact person to whom you want to address your message. Once that’s done, Facebook itself will generate a video by adding photos of you and the chosen person.

If you wish to add or remove any photograph, you can do that before going onto the next step. There are two different themes available right now, namely ‘Old Friends’ and ‘Friends,’ and we’re guessing more will be brought in later. Once you’re done with the process, you can hit share, following which Facebook will let you add an optional personalized message before posting.

The video will then get posted on your Timeline with your friend tagged in it so that it can go on their Timeline as well. Take a look at the video in the space above to know what a ‘Say Thanks’ video on Facebook actually looks like.