Facebook for iOS has recently received an update, version 5.5 to be precise. While the developers over at the company had earlier rolled out free voice calling through the social network’s standalone messenger app, this time they have taken it a step ahead.

Facebook for iOS will now allow calls right from the app itself without charging for it. And by free, we naturally mean that utilizing this benefit will indeed consume data from users’ existing Internet plans.

Unfortunately, the company plans to limit this edition to certain regions, just like it did with the messenger. What we are implying is that only those residing within the borders of the US and Canada will be able to take pleasure in this revamped version of the social network.

What else is new? The 5.5 edition has tweaked the app to show off buttons such as like, comment and so on, under a new light. Also, iPhone, iPad and iPad mini users will now spot the share button at their disposal with different language options. Besides these, a few bug fixes and performance improvements have been carried out.

So far, these are all the changes the mobile app has undergone. But it shouldn’t affect the natural course of social networking such as keeping a track of friends’ activities, chatting, playing games and more. 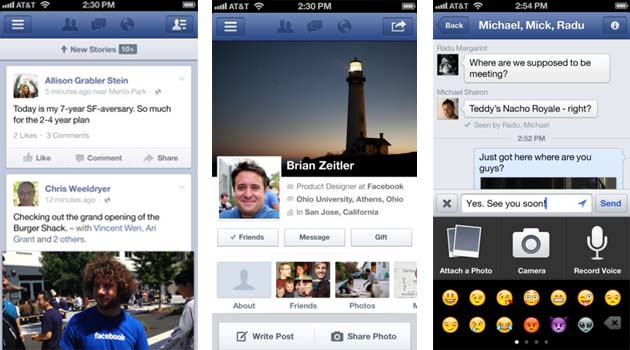 By introducing the Nearby app which intends to take on Foursquare, and the Messenger app, which competes against BlackBerry’s BBM, it appears that the developers are trying their best for the mobile service to win the title of the leading social network. However, compared to 2012 which witnessed three upgrades in the month of December itself, the flow of updates seems to have slowed down this year.

In any case, the latest Facebook for iOS upgrade stares us in the eye at present. Those who own an iPhone, an iPad or an iPad mini which have been optimized for the 5.0 version of Apple’s platform will be able to download the update through iTunes free of cost.

Here are the significant changes listed on Apple’s App Store: