Home General Facebook’s anonymous login for apps wants to put you in control of...

Almost a year ago, Facebook announced a new anonymous login tool which would let you choose the information you share when using an app after signing into the social network. These changes to the company’s login API were revealed at the F8 conference and developers were given one year to comply.

What this means is that whenever you access an app while providing your Facebook login details, you will now be able to select the content you wish to share. Developers cannot adopt the ‘reveal all or buzz off’ approach any more when they want to reach an audience in the aforesaid manner. 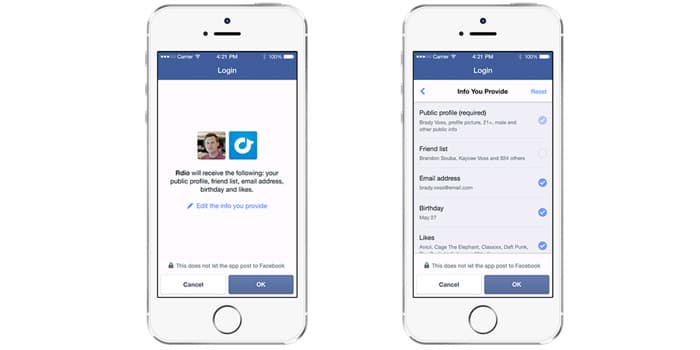 Before the new rules were set into place, remember how you had to allow certain apps or websites see your Facebook public profile, friends’ list, birthday, email ID and more? They should currently have an option edit the data you provide. So you will be able to decide if you want to share your birthday, but not your email address and so on and so forth.

Last year alone, Facebook reported that folks signed into apps and sites with their Facebook login more than 10 billion times. It’s fast and it’s easy, not requiring you to remember multiple usernames and passwords. Of course, if you use an application which specifically needs a certain piece of detail to function (like you friends’ list), it may not work for you.

Facebook decided to introduce anonymous login in 2014 after feedback from users who claimed to be worried about their information being unwittingly over-shared by themselves and wished for better control over their personal data. The reworked login tool means app developers can no longer hope to gather details users aren’t willing to part with.

But the truth is, once you put anything on the Internet, it’s open to exploitation and Facebook’s advertisement ambitions won’t stop it from ‘responsibly’ offering user data to publishers or developers if need be. So anonymous login is just a way of making you ‘feel’ safe on Facebook.