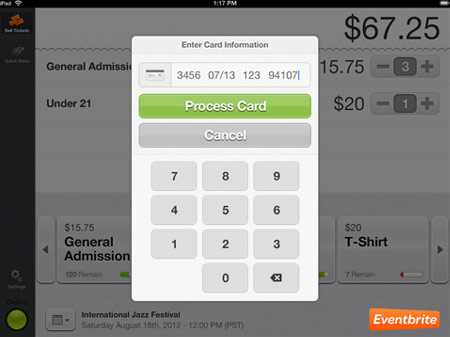 To aid users of its Eventbrite At The Door app for iPad while collecting payments through credit cards, the company has released a hardware companion. The card reader of the same name is expected to diminish the hassles of manually entering credit card details within the application, by allowing for swiping to accept payment.

Compatible only with the Apple tablet operating on iOS 4.3 or later, the At The Door application can be used to sell tickets or products, maintain transactions and other details as well as view them at any time, in an organized manner. Originally, the software allowed users to manually enter payments made through cash or credit cards. With the reader peripheral, sellers will no longer have to take as much time for the same.

“At The Door transforms an off-the-shelf iPad into a paradigm-shifting tool for managing sales for events. We’re essentially taking the devices that are proliferating among consumers and transforming them into perfectly-tailored tools for event organizers, at no cost, and with greater impact than anything previously available.” To celebrate the launch, Eventbrite is waiving service fees on transactions made through At The Door-only credit card processing costs will be applied,” ventured Kevin Hartz, Eventbrite CEO and Co-Founder. 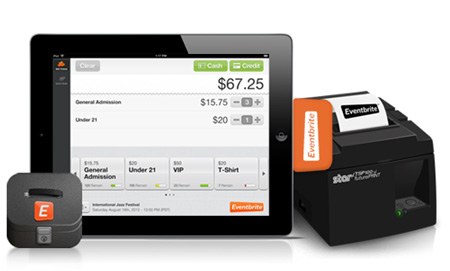 The card reader is a bright orange colored gadget which flaunts the Everbrite logo. Equipped with a 30-pin adapter, it is designed to be plugged in through the iPad’s port which accepts the charger. The overall system is expected to be capable of processing over 400 transactions per hour. Owing to the encryption on the hardware itself, data passing through it should be fairly safe from security risks.

The Eventbrite At The Door card reader price tag spells out to be $10. As a promotional offer, the company is offering $10 promotional credit to concerned buyers’ Eventbrite accounts.