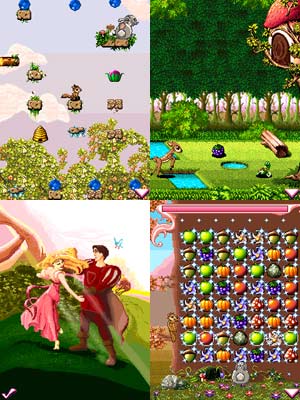 The people who love watching movies can now look forward for its game as Disney Mobile Studio is going to release a mobile game known as Enchanted.

The game features a beautiful Giselle, Prince Edward and Pip the squirrel. These characters are projected out of the fairy tale kingdom Andalasia in to modern day New York.

The player has to meet Giselle and her animal friends and enjoy the exciting adventures. There are three mini games which the player has to challenge both brain and reflexes.

The game has 14 levels while the mini games will rotate that is the player has to play one level of each mini game.

Enchanted has been designed to be as accessible as possible to players each mini-game uses an in-game tutorial so that any instructions that are included as part of the playing experience.

The story is based on princess Giselle who has met Prince Edward once in her entire life and to make sure she will never forget his face, she wants to immortalize him as a mannequin.

Through the three mini-games, the player experiences different parts of Andalasia while helping Pip, the squirrel, and other animals from the forest collect materials to create the statue.

In the first game, Pip, the squirrel has to get the statue piece by jumping through the forest. This mini-game is full of action avoid traps and out smart malevolent bees and mushrooms.

When he reaches the goal he has to solve a challenging puzzle together with Bunny. Move rows of fruit and put them together to free the piece hidden behind.

As the gamer plays two characters in this game he can move up and down as well as left and right. By carefully managing the time limit you can earn some very high scores.

In the game, Fawn and Boar bring it all back to Giselle’s cottage and each of the animals use their various strengths. Boar is strong and can carry heavy items while Fawn, the deer, is quick and nimble.

The game has a fairytale feel with beautiful graphics. There are friendly forest animals that cooperate with each other to help their friend Giselle.

Sunil Gunderia, VP Mobile, EMEA stated, “Enchanted is a great game for the Christmas season, and fits perfectly with our strategy to develop games that anyone can pick up and play without a steep learning curve.”

He further concluded, “Enchanted the mobile game is a great extension of this wonderful story and will enable fans of all ages to experience the Enchanted story everywhere.”

The game will be made available this Christmas and the movie is already released in the US.