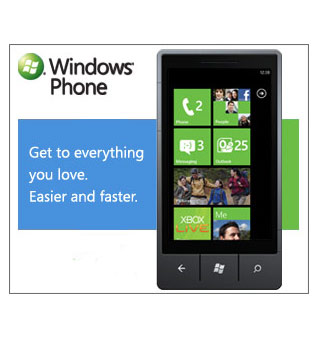 The Windows Phone 7 has accumulated enough appreciation before its highly-anticipated launch. The coveted device is all set to allure users with innovative features. Extending its efforts, EA Mobile has revealed the first wave of EA games which are expected to amplify the Windows Phone 7 experience starting this fall.

The action-packed EA games boast of being Xbox Live-enabled and put forth a distinct way to track and share scores with leaderboards, unlock Xbox Live achievements, add gamescore and seamlessly converse with Xbox Live friends through Xbox 360, Windows-based PC and Windows Phone 7.

“Our collaboration with Microsoft brings EA’s world-class catalog of global game franchises to Windows Phone 7, offering a unique set of gaming features perfectly suited to the deep, innovative experiences we value at EA,” commented Travis Boatman, vice president of Worldwide Studios for EA Mobile. “We see consumers deeply integrating devices into their lives and entertainment in new ways every day. Challenging your Xbox LIVE friends to an EA game from the phone in your pocket keeps you connected and having fun no matter where you are.”

The company will bundle together various games and engage handset owners with challenging features. The Need for Speed Undercover game will put forth high-performance cars via 24 undercover missions and eight exciting levels of fun.

“Together EA and Microsoft have created some of the definitive console games of this generation, and we’re excited to bring that powerful alliance to Windows Phone 7,” remarked Ron Pessner, general manager of Xbox LIVE mobile, Microsoft. “This is a new and major games platform for Microsoft, and we look forward to the amazing games EA will deliver over the coming years.”

The Tetris game will offer twelve enthralling variants and gamers can challenge their Xbox Live friends to beat their top score in the enticing single-player Marathon mode. The Sims 3 game provides players with the flexibility to select several personality traits and personalize their Sims characters with utmost ease. The Monopoly game for the mobile phone is revived with interactive features and animated tokens.

These games are expected to enhance the Windows Phone 7 experience however the pricing details are unclear as of now.