There’s going to be a Nokia X2 series of smartphones from Microsoft which run on Android, if the latest leaks are to be believed. Along with specifications, a press render of the smartphone has been posted online, suggesting that the upcoming device will be a small upgrade over the current ones.

The first smartphone in the series will go by the model number RM-1013. The Nokia X2 phone was spotted on AnTuTu couple of times. The first was when benchmark scores were revealed. The device managed to gain 11,827 points, according to G4Games, which is higher than that of its predecessor which scored around 7500 points. The phone is said to come with a Qualcomm MSM8X10 chipset which falls in the Snapdragon 200 family, but is different from the one used in the current generation handsets. 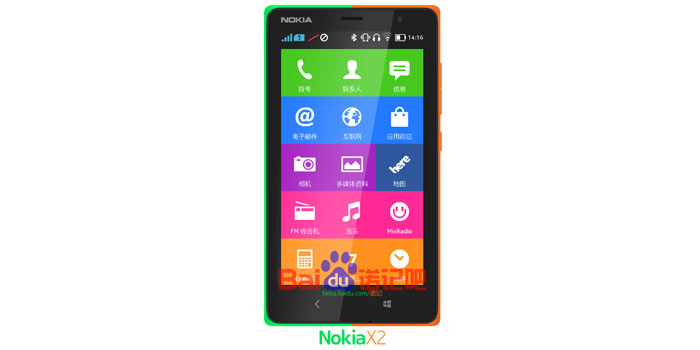 This SOC has dual Cortex A7 cores clocked at 1.2GHz with Adreno 305 graphics, while the processor in the first generation phone is based on the Cortex A5. The RM-1013 runs on Android 4.3 Jelly Bean and it’s certainly going to be a forked version of the OS. Considering that this is the base model, it will come with a 4.3-inch display with WVGHA 800 x 480p resolution. The phone will also have dual cameras, VGA front and 5MP rear. Memory-wise, the internal storage is the same at 4GB, but the RAM has been increased to an entire gigabyte.

On an ending note, the image posted above is allegedly of the second generation Nokia X2 series which surfaced on Chinese forum Baidu. It shows that the phone has dual SIM support and features the same UI as the current handsets. What’s different is that there’s a home button next to the back key, which has the Windows logo instead of the standard design used for Android devices.

Here’s a roundup of the Nokia X2 specs: