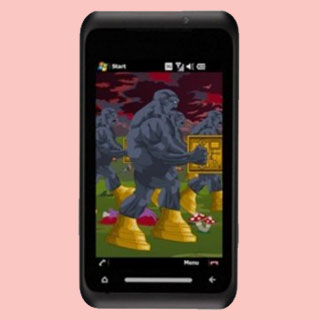 DoCoMo and Telefonica made public their plans to launch a Windows Mobile handset developed by Toshiba in Japan and Spain. The Japanese version of the handset by DoCoMo will be known as Pro series T-01A and the Spanish version by Telephonica will be called TG01.

DoCoMo’s PRO series T-01A is a 9.9mm ultra slim phone. It has an exterior made of magnesium alloy and is available in deep black or vivid white colors. The device shows off a 4.1” widescreen format with REGZA technology. The phone has a massive processing power at 1 GHz. It offers fast internet browsing with flash support as the user navigates. It has one touch way to favorites and a unique three stripe menu.

The Toshiba TG01 features an enormous 4.1” Wide-VGA (800×480) touch-screen display. The phone comes with advanced image tuning technology. It ensures greater image control with a bright and vivid display. It also has fast-moving video playback. It supports Bluetooth v2.0 and Wifi. The handset weighs 12g and has a 3.2 megapixel camera with autofocus.

It is a device with Qualcomm’s Snapdragon chipset having immersive multimedia capabilities with a 1 GHz computing power. The chip has a GPS built in and high-speed 3G connectivity. The phone also offers connectivity to GSM/GPRS/EDGE and 3G HSPDA/HSUPA. It is built on the Windows Mobile platform and also features the latest Internet Explorer Mobile. It has a memory of 512MB ROM / 256MB RAM and a micro SDHC card slot.

DoCoMo Senior Vice President and Product Department Managing Director Kiyohito Nagata explained, “DoCoMo looks forward to working with global operators such as Telefonica to jointly develop mobile services and applications for mutually enhanced global competitiveness. At the same time, we would be pleased if such efforts have the added effects of supporting Japanese mobile phone manufacturers in their attempts to expand handset sales overseas.” Luis

Ezcurra, Manager of Handsets and Multimedia of Telefonica Espana stated, “Operating System platforms are becoming more and more important to drive the extraordinary growth of mobile internet business. DoCoMo and Telefonica are leading operators in their respective markets and this is a great opportunity to provide their customers with best-in-class products and solutions.”

The two mobile communications companies DoCoMo and Telefonica, in their joint efforts are trying to reinforce corporate competitiveness and provide complete customer satisfaction. They are also attempting to include a combined study of services and applications that work on open Operating System handsets.
The phone is likely to be available around June to July. The pricing of the phone is not revealed yet.