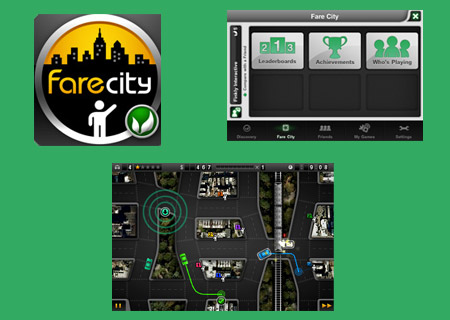 Looks like iPhone users may never be bored wherever they are be it waiting for a bus or standing in a long queue. At least the surge of applications for the device makes it seem so. Digital Chocolate has released its Fare City application on iPhone. The company is collaborating with Finkly Interactive, to form the innovative and unique Fare City traffic control app.

“It was a delight to work with a talented developer like Finkly Interactive on the Fare City app. We think the game makes great use of the innovative Multi-Touch user interface of iPhone and iPod touch, and is an incredibly fun and addicting game to play,” commented, Trip Hawkins, CEO of Digital Chocolate.

With this game, players are compelled to remain attentive as they swipe and drag their finger to direct taxis to gather and provide their fares. Players can also log into their OpenFeint, Facebook or Twitter accounts to publish their accomplishments or to contend with their friends.

From the Apple App Store, one can download the Fare City app for $0.99 on iPhone. A free version with restricted amount of taxis on the original map is also obtainable.