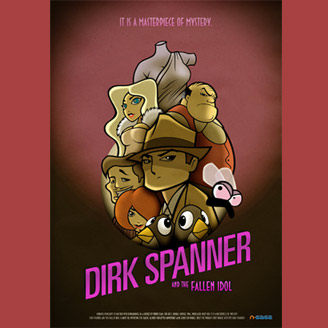 There has been another game launched for the new coming soon Nokia N-Gage mobile phone. This game is a detective adventure and is known as Dirk Spanner and the Fallen Idol.

Dirk Spanner and the Fallen Idol has stylish, yet seedy fictional city of New Haven. The game comes to life through the comic book ambiance.

Gripping yet funny stories of conflicts, romance and deception with plenty of movie stars, rip-offs, double-crosses, wigs and moustaches which engross beginners as well as experienced game players.

He further continued, “With the combination of stunning visuals and enthralling storylines, players cannot help but be spellbound by this game.”

In the game Dirk is a lead private eye. The players are propelled into mysterious adventures, battling an array of femme fatales and gangsters. The player will be engaged in a host of activities ranging from solving the mystery of stolen statue and a brutal murder, to uncovering the case of an accidental penguin-related death.

The player solves mysteries using the unique one-button, camera-based controls allowing the gamer to explore the city. Dirk Spanner and the Fallen Idol has jazzy soundtrack which helps to set the mood for each stage of the game.

The game Dirk Spanner and the Fallen Idol is expected to be available in the beginning of 2008.