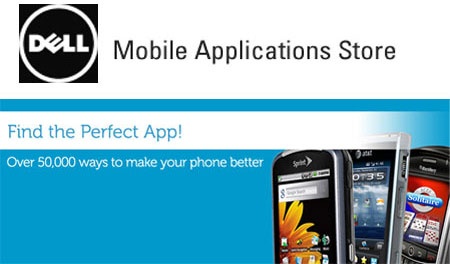 With the Dell Streak placed on the shelves of U.S mobile markets, it has brought something else along with it. Initially, when we reported on the Dell Streak we had mentioned that the company would soon come up with an app store of its own. Well finally, the Dell Mobile Applications Store is out, giving the Apple App Store and the Android Market good and healthy competition.

This new store has been developed by PocketGear, which even supplies the content. It is a multi-platform store wherein it sells apps operating on BlackBerry, Palm (along with Web OS), Android OS, Symbian and Windows Mobile. Even though there is no news about the developer terms but the mobile terrain is speculating that PocketGear’s terms would include 60% developer revenue share, which appears to be their usual terms.

It is said that dell’s app market will support PayPal and credit card billing mechanisms. This enticing store is surely going to bring users a good new alternative to carry out their application shopping. Well, let’s get the app shopping list ready!