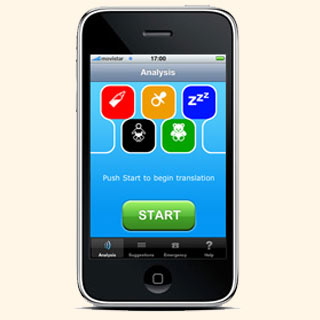 An iPhone app developed by Biloop Technologic S.L is claiming to have solved the mystery of why babies shed tears. The Cry Translator app is said to identify five distinct cries made by infants while they are hungry, sleepy, annoyed, stressed or bored.

The developers of this app state that the Cry Translator is accurate 96 percent of the times. Further, the app identifies a cry within ten seconds. When the device with the app is placed near a wailing child, within 3-5 seconds, the LCD screen of the Apple device will be illuminated with one of the five fore mentioned distinct emotional states.

This communication tool for toddlers also provides suggestions to calm them based on any of the five states the kid is experiencing. The app is user friendly and iPhone owners just need to press the ‘Start’ to initiate app, after placing the handset’s microphone, less than one foot from the baby. The Cry Translator is especially designed for parents and caregivers, who sometimes find it difficult to interpret the reason of their child’s cry.

iPhone users can grab the Cry Translator app (if they believe in its authenticity) for $30 from the Apple App Store.