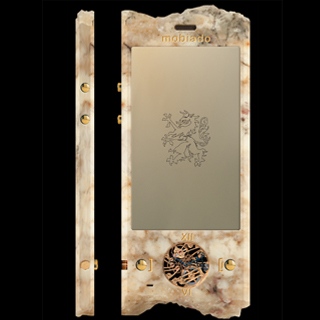 Fiends of exquisite and stunning phones may want to add this one to their collection. Mobiado has come up with a new handset named CPT001. It appears to be an object’d art as well as a concept phone.

Mobiado is claimed to be constantly steered by a philosophy of doing things in a different way. This belief seems to have resulted in the development of CPT001 concept phone. The device is crafted from one slab of solid marble packed in with gold filled embossed letters and particulars.

The touch screen is built from a solo huge chunk of sapphire. The buttons and watch crown are fashioned from solid gold; with a splendid gold skeleton mechanical watch movement positioned between the Call and End buttons.

The use of marble is a tribute to the incredible marble statues belonging to the renaissance era. A few may consider the concept of a marble phone to be unusual, but an out-of-the-box thinking may win brownie points from users willing to try something different.

The availability of price of CPT001 phone is not clear for now.