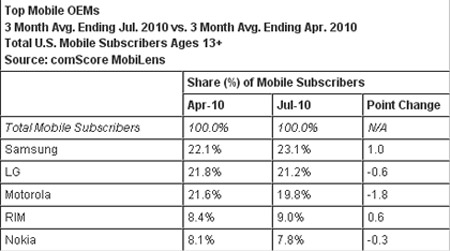 We had earlier written about comScore reporting Motorola, Samsung and LG as the top OEMs in the U.S. for the first quarter of 2010. In comScore report states that Samsung is the top handset manufacturer amassing a 23.1 percent market share whereas RIM topped the smartphone platforms with a 39.9 percent market share in the U.S. mobile phone industry. The data has been compiled from the comScore MobiLens service which reported the main trends which took place in the three month average period which ended on July 2010.

This quarter’s findings have been compared to the previous one’s report. It ranked mobile original equipment manufacturers (OEMs) and the smartphone operating system (OS) platforms present in the U.S, according to the market share of current mobile subscribers’ ages 13+. The company further recorded the most popular activities and content practiced on the subscriber’s primary mobile phone. In Q2, 234 million Americans aged 13 years and above used a mobile phone. The report stated that Samsung ranking the highest with 23.1 percent, followed by LG amassing 21.2 percent share, Motorola captured a 19.8 percent share, RIM secured a 9.0 percent and Nokia at 7.8 percent.

53.4 million people in the U.S possess a smartphone as compared to 11 percent from Q1. RIM placed first with a 39.3 percent share, while Apple came in second at 23.8 percent share. Android increased its market share with a significant rise of 5.0 percent adding up to a 17.0 percent. Microsoft amassed 11.8 percent coming fourth with Palm tagging behind at 4.9 percent. The smartphone industry seems to be growing even though a number of platforms lost a bit of share to Google, they have still gained more consumers.

On comparing the various functions practiced on the phone, text messaging came in at number one as 2 out of 3 U.S. mobile subscribers used it, while in terms of percentage it was 1.4 percent higher than the previous quarter. Browsing was placed in second with 33.6 percent of U.S. mobile subscribers using it. Applications were downloaded by 31.4 percent people which rose from the previous records by 1.6 percentage points. Social networking sites or blogs were accessed by 21.8 percent of the mobile audience, rising by 1.9 percent. Listening to music placed in at number six with an increase from 13.8% to 14.5%.

Well, looking at the statistics proposed by this comScore report, Android seems to be working hard as it makes its way to top with the spot currently dominated by BlackBerry. Samsung’s super AMOLED touchscreen Galaxy S Series and other handsets appear to be working to augment its market share.