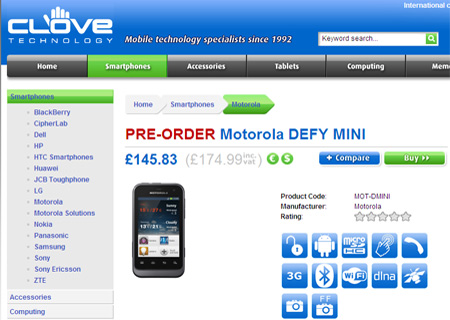 Disclosed earlier this month, the Motorola Defy Mini and Motoluxe smartphones are now available for pre-order via online retailer Clove. While the former operates on the Android 2.3.6 Gingerbread OS, the latter runs on Android 2.3.7 and is also known as the Motorola XT615.

As the name suggests, the Defy Mini is a smaller and more compact version of its bigger brother, Motorola Defy. The integrated 1650mAh battery is capable of offering talk time and standby time of up to 10 hours and 21 days, respectively. It comes embedded with a 3.2-inch HVGA 480 x 320p touchscreen display constructed from Corning Gorilla glass which secures the exterior from water, dust and scratches. Users can employ the 3MP rear facing camera with flash and the front facing VGA snapper for taking snapshots and videos. 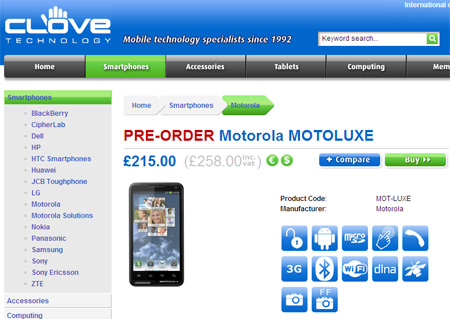 Running on an 800MHz processor and employing the Motorola MotoSwitch user interface is the Motorola Motoluxe smartphone. It sports a 4-inch 480 x 854p LCD touchscreen display and is capable of lending support to Wi-Fi, Bluetooth, DLNA and 3G connectivity options. This handset is equipped with a secondary VGA camera and an 8MP main camera possessing auto focus and flash. Furthermore, it operates on a 1400mAh battery which provides talk time and standby time of up to 6.5 hours and 19 days, respectively.

The Motorola Defy Mini and Motoluxe can now be pre-ordered online at clove.co.uk and are individually priced at £175 and £258 inclusive of VAT. They are scheduled to start shipping from late February or early March.

UPDATE: For some reason, both phones appeared to be unavailable when we last checked the official Clove product pages for the same.