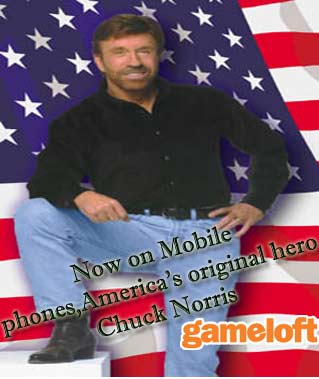 With no introduction needed, the popular hero Chuck Norris lets you combat the combined troops of Kim Jong-Il and Fidel Castro here and abroad. Gamers can disguise as either Commando Chuck or Ranger Chuck with the crafty skills of the energetic Chris Norris. Entirely wreckable environments empower Chuck to demolish whole forests with his gun and to swat down houses with his fist along with the enemy.

As Chris Norris, you can pound your friends to dust with the cool avatar feature that allows gamers to insert their friends face or their own face via the handset’s digital camera by placing it on enemy bodies. Breaking all norms of how mobile games are played, the creative Zoom Perspective enables players to hurl defeated rivals right at the screen, the way Chuck does it in his movies.

Three main reasons Chuck resolves to make a mobile game are that, first simply combating bad guys refreshes Chuck’s mood, secondly he wants to hit the bad guys with so many lefts that they beg him for right and finally he loves encountering evil on screen whether its movies, television or your mobile. Integrated by the legendary cult Chuck Norris website, with its ironic sense of humor and truly inspired by the fictional character of Chris Norris, Bring on the Pain retracts from many of the facts that that have kept the Chuck audience entertained online for many years.

With a strategic partnership formed by Gameloft with Chuck Norris’ exclusive business development firm, Brand Sense Partners in the beginning of this year Chuck Norris: Bring on the Pain should bang on to mobile phones in August 2008 with major US carriers.