Google has been tinkering with Chrome for iOS and has just announced an update which tows along split view multitasking support for the iPad. The tweaks take full advantage of several new capabilities launched with iOS 9 for the newer Apple tablets. The latest version of the mobile OS brings in Slide Over, side-by-side Split View and Picture in Picture for those who wish for higher productivity value from the iPad.

Even if you aren’t too fussed over how much work you can get done if multitasking was an option before iOS 9 was introduced, it would have felt nice to be able to open multiple apps at once. Well, here is split view support through the Google Chrome browser update for iPad. It is compatible with the Apple iPad Air 2 and Mini 4 tablets. 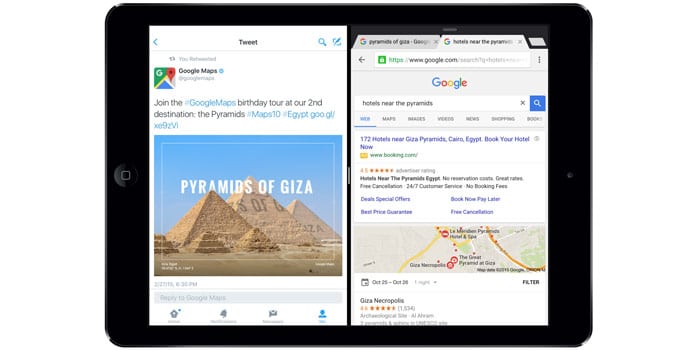 It’s possible that the feature will be supported on the upcoming iPad Pro too. Imagine how sick it will look on the gorgeous 12.9-inch 2048 x 2732p display of the tablet. Owners of older variants of the Apple iOS device will have to make do with just the Slide Over app sidebar and Picture in Picture. Of course, the changes to the Chrome browser are not restricted to the tablets.

If there was one essential aspect Chrome for iOS was missing compared to its versions for desktop and Android, it was Autofill. Google has amended the situation by bringing this functionality to Apple users too. The company promises that those on iOS will be able to shop online more conveniently and securely without needing to keep filling out standard purchase forms.

Head over to this page if you want to get the latest version of Google Chrome for iOS from Apple iTunes. It is a 69.3MB download which works with iPad, iPhone or iPod touch devices, and requires iOS 7 or higher.