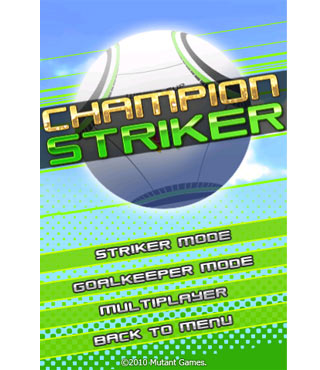 For a true football buff the excitement is never limited to just an event, its undying loyalty for the sport. Keeping to that spirit, a new soccer game entitled the Champion Striker from Mutant Games has been launched recently. The game is designed for the iPhone and allows two players to play locally as they share the smartphone turn by turn. Soccer aficionados can practice their kicks and saves with this simple-to-operate iPhone title.

Gamers can either step into the striker’s shoes or the goalkeeper’s gloves depending on what suits them best. The striker has to flick the ball in order to kick it whereas the goalkeeper has to orient the device to shift the position of the gloves. Simple yet addictive, this game packs in an array of power ups, different targets and ball types to keep all levels of players satisfied.

“We felt that none of the other penalty games in the App Store offered a complete experience, in Champion Striker you can be the goalkeeper, taking advantage of the iPhone’s accelerometer, or play a penalty round against a friend in the bar” commented Daniel Fernandez, CEO of Mutant Games.

The Champion Striker packs in 16 goalkeepers and has a unique captain to lead each national team. The game sports the Open Feint feature to support Leaderboards. The title is loaded with achievements which users can boast about along with their high scores on Facebook or Twitter. Featuring an arcade style of music it offers a very immersive gaming experience.

The Champion Striker can be downloaded from the App Store for a price of $0.99 available for a limited period of time.