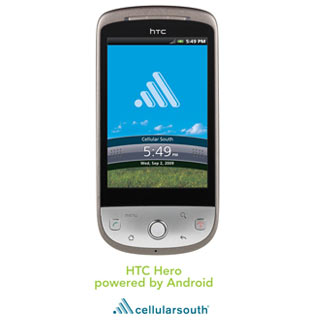 After a ‘so-called’ amazing pre-order record, Cellular South will be finally offering the Android driven HTC Hero on November 9. The touchscreen smartphone is equipped with Google mobile services including Google Search, Google Maps, Gmail and YouTube.

Further, it also offers access to a host of applications built on the Android platform. Along with the smartphone, the network carrier also launches Text CS, a free text-for-help support service incorporated into the device.

“It’s really no surprise that our pre-order period for the HTC Hero was such a success. With Android’s high level of customization and features that can’t be found on other devices, along with access to the Android Market, we’re seeing a record number of consumers purchase this advanced smartphone. With our new Smartphone Unlimited Plan, our customers are saving thousands of dollars each year compared to other leading competitor plans. We have broken down the barriers to having full access to the richest and simplest wireless experience – our value proposition is unmatched. Plus, Cellular South customers know they’re going to get the most out of their Android-powered device with our superior 3G network and unique mobile Discover Center accessibility,” marked Kevin Hankins, chief operating officer for Cellular South.

“The launch of our HTC Hero is exciting. We also know that a smartphone is only as good as the network on which it operates, which is why we’ve significantly invested in growing our 3G network – activating 324 new 3G sites this year alone – so that now we reach more than 80 percent of Mississippians with the best high-speed data service available,” he added.

To enhance the usability of the HTC Hero, Cellular South has introduced Smartphone Unlimited Plan at $79.99 per month that is inclusive of talktime, text, accessibility to the Web and e-mail. Further, for each $79.99 plan, customers can add a second smartphone for $39.99 per month.

The HTC Hero can be purchased at Cellular South for an opening price of $99 after a $50 mail-in rebate.