The Celkon A107+ Signature One has been officially launched in India, although there are no signs of the smartphone on any of the major online outlet as of now. This news comes almost three months after Celkon introduced the smartphone’s predecessor with relatively modest offerings.

If we were to browse through the specifications of the Celkon A107+, it’s understood that the 5-inch handset hasn’t taken that big a leap away from its older sibling. But one of its major highlight happens to be Android 4.2.2 Jelly Bean which is a much noteworthy development from its ICS-toting ancestor. 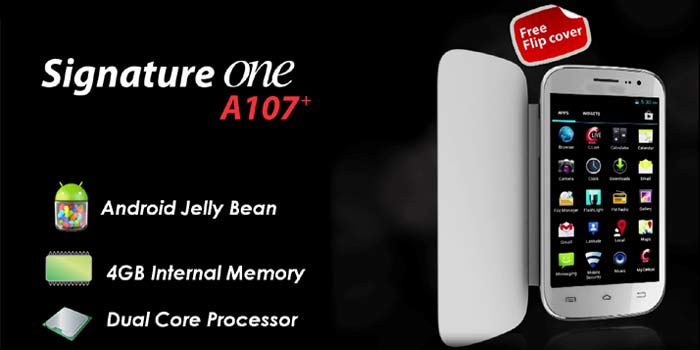 Besides the visible OS upgrade, the inclusion of a 2,100mAh battery instead of a 1,200mAh power pack and a 1.3MP webcam, there is nothing worth scavenging for if the previous device’s specifications are already known. So this means, a 5-inch WVGA touch display rests on the front panel and at the same time, an 8MP camera slithers onto the rear panel.

Seeking aid from 512MB of RAM is a dual core chipset tuned to tick at a clock speed of 1GHz. As for memory, the onboard microSD card slot ensures further expansion of up to 32GB, lest the built storage space is found to be inadequate.

Even after being presented with an official recognition, the A107+ Signature One still awaits a price.