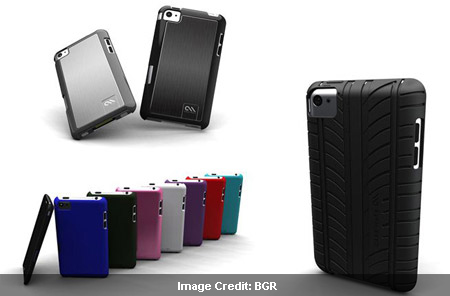 Although rumors about the much awaited iPhone 5 don’t seem to end, this piece of news is more than that and blows the cover off the design of the smartphone, literally! Case-Mate put up images of its new covers for the iPhone 5 in seven different shades which somewhat revealed the form factor of the next generation iPhone 5.

Even before the handset makes its debut, Case-Mate seems to have made sure their stocks of covers for it are ready. However, just some time after making the images public they took them off their website and in its place put up a message saying their cases will be ready when users’ have the new iPhone 5 with them. For iPhone 5 enthusiasts though, BGR noted down the unique new shape of the device and how it differed from the previous generation models.

The iPhone 5 appears to be slimmer and lighter than its predecessor. Looking at the cases in which lay the elusive smartphone, it seems that they possess tapered edges along with a trim profile. In place of a glass back panel, the new Apple offering may feature one of aluminum.

Anticipated by many, the fifth generation model is all set to release next month and will apparently sport a wider screen size of 4-inches. As per wide speculation, it may also equip an 8MP camera and run on an A5 dual-core processor.

The Case-Mate page says that it is ready with its collection of covers, from the slim Barely There to the protective Tough case. However the mystical iPhone 5’s design and form turns out to be, users can be assured that they don’t need to worry about finding its cover now.