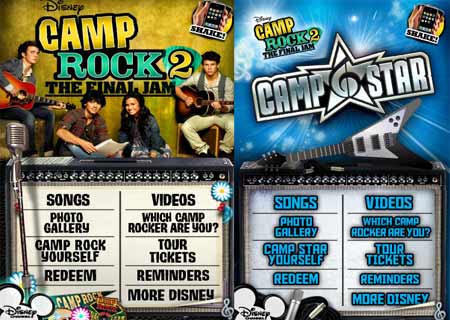 The application lets users hear music clips, watch videos and much more. It includes free download of the song ‘Can’t Back Down’ with vocals from Demi Lovato, plus Alyson Stoner, Anna Maria Perez de Tagle and Char Ligera. For all behind-the-scenes content and tittle-tattle, the app has incorporated exclusive day and date audio and video premieres of the movie.

For lots of fun and amusement, the Camp Rock 2 The Final Jam app comes with ‘Camp Rock Yourself’ photo feature where users can take photo or use native photos in a Camp Rock 2 picture frame. There’s also a ‘Shake’ feature which will re-skin entire app and all slides to ‘Camp Star,’ the rival camp in the movie.

Additional features include audio and video sections with links to iTunes and reminder screens to take over home page for key dates. The audio player will run throughout the application as well. ‘Which Camp Rocker Are You’ Quiz for users to reveal their Camp Rock 2 Star twin and photo gallery which highlights key scenes from the new movie make the app to crave for.

The Camp Rock 2 The Final Jam app is now available for $.99 at the App Store.