Those of you who didn’t have your eyes trained to the sky during Saturday’s lunar eclipse missed a chance to see what the celestial phenomenon called a ‘blood moon’ looks like. Well, the time lapse video below is ready to show you what it is and we bet you’ll be held spellbound too.

As you’ll already know, a lunar eclipse can only take place on a full moon night and that too, when the Earth stands between the moon and the sun. It can be seen from any part of the world that’s under cover of night. On April 4, not only were sky-watchers treated to such a phenomenon, they were also given a rare glimpse of another interesting occurrence, as mentioned above.

Though astronomers by profession may frown at the term ‘blood moon’ being tossed around so lightly, you could argue that it does turn red after all. This is because our planet’s sole natural satellite may take on such a hue during a total lunar eclipse owing to the light of the sun passing through the Earth’s atmosphere before hitting it.

Having lasted for roughly three hours from 3.45pm to 7.15pm IST (and reaching its peak at approximately 5.30pm IST), Saturday’s was the first brief, but total, lunar eclipse of 2015. The next one which is expected to happen on September 28 this year, will be the fourth in a closely spaced series and complete what is called a lunar tetrad. 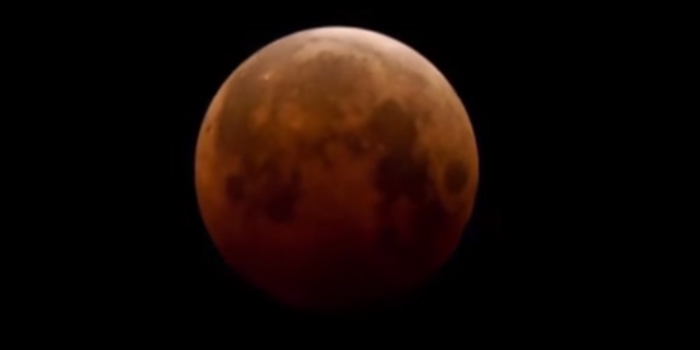 Also see: Lunar eclipse will transpire next Saturday, you could view a blood moon too

If you take a take a look at the time lapse video which comes courtesy of NASA, you will notice that the whole lunar eclipse was played out in a subtle but gorgeous palette of colors. The moon was seen to take on various hues from pearl white to rust to blood red to gray to pale yellow.