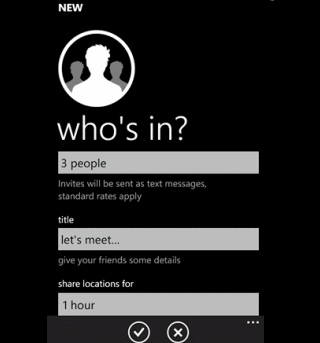 Bing has developed a new We’re In app for Windows Phone. It allows users to connect to their friends when desired by the means of a limited time invite.

Primary users can sign up with their mobile numbers. The app works on the arrangement of sending specific invites. Whenever required, like in the event of a roadtrip, meeting, or even when just finding a friend in the crowd, users can send invites to their friends asking them to join in. Once connected with others, members can share their whereabouts and other details.

Friends can be selected directly from phone contacts or by entering their phone number. While sending the invites, users can also define the time limit for which the location sharing would last. When receiving an invitation, users are alerted through a text message. Windows phone consumers can connect directly and those using other phones can join the mobile website via the invite.

The group of users connected via invite will be able to see each other’s locations on a map and also updated status messages. A specific person’s status can be seen by tapping their user tile. Whereas, when everybody’s updates are to be viewed, the people tab comes handy. Also, if a certain user would want to disjoin the group before the time of expiry, they can utilize the leave tab, and also update a status message if they like. Once the prescribed time is up, the invite expires and location sharing among users is ceased.

Currently available as a Windows Phone application, Bing has announced plans to bring the We’re In app on more devices.