With the iPhone 6 and iPhone 6 Plus now out in a large number of markets across the world, we have news that should definitely bother the folks over at Apple. The newest range of smartphones from the company comes with larger screens, and this is exactly what could be leading consumers to refrain from using their iPad tablets.

Data which suggests this scenario has just been released by Pocket, the app which allows you to save content to be viewed later. It has been found that those who own either the iPhone 6 or the iPhone 6 Plus are seemingly spending less time reading on their iPads, as compared to what the case was with previous iPhone models. 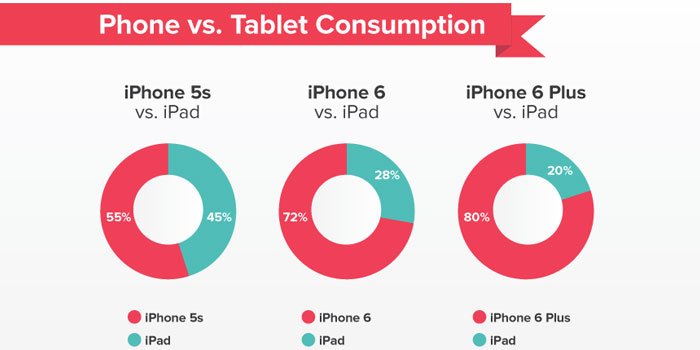 It can hence be inferred that the bigger 4.7-inch and 5.5-inch displays on the new devices are proving enough for users to consume the desired content without feeling the need for larger displays. Pocket conducted an extensive research before revealing its findings, even as it observed data analysis of over 2 million articles and videos.

Using the acquired statistics, it compared the before-and-after behavior of users who upgraded from an iPhone 5 or iPhone 5s to an iPhone 6 or iPhone 6 Plus. Pocket notes that those who have graduated to an iPhone 6 view content on their smartphones 72 percent of the time as opposed 55 percent when they were on a smaller screen.

Similarly, people who upgraded to an iPhone 6 Plus were found to be viewing content on their handsets 80 percent of the time. Moreover, it has also been discovered that those who own the new iPhone 6 models as well as any iPad model have started using the former more often after purchasing it.

All these findings are leading many to conclude that Apple’s new iPhone 6 and iPhone 6 Plus are actually cannibalizing sales of the iPad. Although it’s too early to believe this, the company will obviouly be concerned by this.