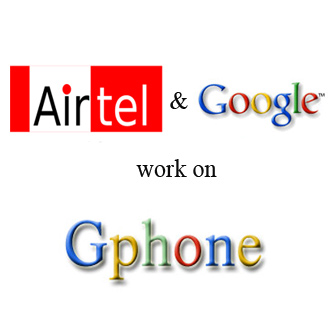 Bharti Airtel and Google Inc’s join hands to work on Google Phone (Gphone). This initiative is expected to be announced soon by search giant Google with handsets that will operate the system.

It has come to be known that the much-talked about GPhone is in actual fact a operating system for mobile phones and not a mobile phone as previously thought.

Mobile companies like Samsung and Motorola are likely to give orders for handsets specially pre-loaded with the Gphone OS. Google said that Finnish giant Nokia is not their partner in this.

The Gphone that will power Google’s mobile operating system has been is built on open source Linux technology.

With the introduction of GPhone, it is expected that the users may start using cheaper alternatives with ease that will be able to operate various other applications for connectivity and content.

In this aggressive business the attention is now moving to application-rich content accessed via mobile phones. Now, independent software developers will work with Google and together they plan to engage in recreation of tempting their customers.