Customers can purchase Wifi Dabba prepaid tokens at small shops such as tea stalls and bakeries across Bengaluru. Once bought, they just have to connect to the network, fill in their phone number on the browser page that opens, type the OTP, and punch in the key to start browsing. The process is similar to how a person would sign up for a hotel’s Wifi. 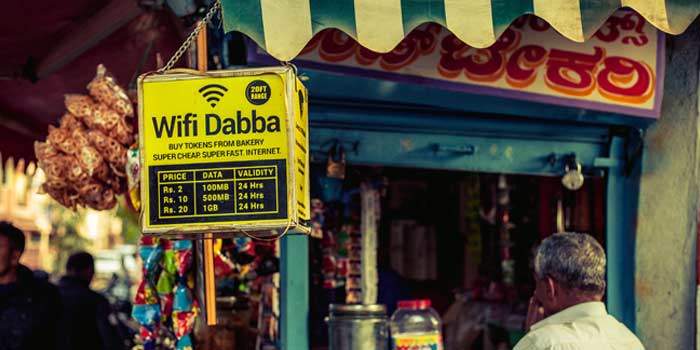 Instead of relying on expensive cellular towers, Wifi Dabba utilizes cheaper routers powered by fiber optic networks. It believes they’re faster and more reliable than the former, capable of 50Mbps speeds within a 100m – 200m radius. It’s managed to install over 350 routers so far in the city and hopes to go national in 3 to 4 years with lakhs of these ‘dabbas.’

Wifi Dabba caters to a pretty diverse user base including lower-income workers like barbers and masons, students, and even local shopkeepers. Its business model sounds similar to Google Wi-Fi, but that’s restricted to railway stations.