Home BlackBerry BBM Protected service has your back if you’re using Android or iOS...

According to recent findings, the average cost per data breach for a firm has now exceeded $6 million, which is why a service such as BBM Protected is something that many enterprises would adopt at the moment. Until now however, this facility was only available to be used between employees of the same company using BlackBerry handsets.

That has changed in a big way, even as access to BBM Protected has just been opened up by the Canadian manufacturer for those who use the regular version of the messaging app on their Apple or Android devices. For those unaware, this service allows BlackBerry Enterprise Services users to chat with their counterparts using high-grade encryption that ensures security. 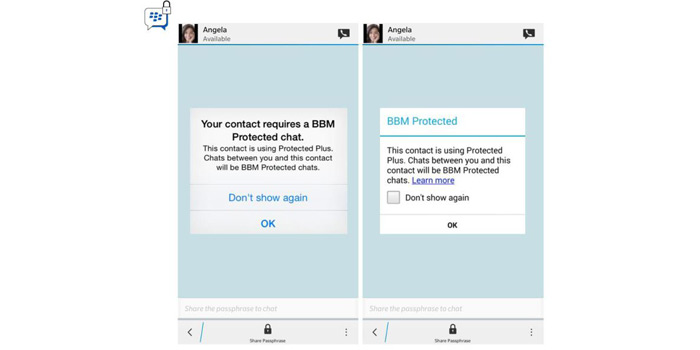 At those companies which have initiated the service on their enterprise suites, employees can choose to initiate encrypted chats in order to stay away from snoopy hackers. With the new development, they can even start protected chats with non-BBM Protected users working within or outside their organization. All the ‘non-Protected’ person needs on their smartphones is the normal version of the free BBM app, be it on BlackBerry, Android or iOS gadgets.

The company has revealed that this new service is very easy to install for IT administrators on their suites. Companies can now even receive a free trial of it for 30 days, after which they’ll need to pay additional subscription costs to keep using it in their organizations.

This fresh and open approach that has been granted to BBM Protected will surely work in BlackBerry’s favor, even as the company is currently struggling to stay relevant among its prime customers which happen to be enterprise users.