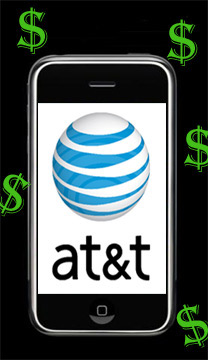 An investment banking firm based in Minneapolis, Piper Jaffray & Co. has estimated that AT&T pays Apple $18 per month for each iPhone subscriber. This estimation was made by analyst Gene Munster.

The precise information of AT&T’s revenue-sharing agreement with Apple has not been revealed, but the analyst assumes that the amount of the two-year life of a user contract, exceeds the actual price of the iPhone. Apple, though, has verified that an agreement as such does exists, but no additional information of how much cash the company is getting from the revenue AT&T makes on iPhone customers, is revealed.

Although, in July, Munster had approximated of Apple receiving just $3 per iPhone subscriber and $11 per iPhone customers new to AT&T. but the numbers have been rethought after Apple’s latest earnings have released.

1.4 million iPhones are engaged by Munster, taking into consideration that Apple has sold since the device made its debut. It takes away 250,000 iPhones that Apple said it considers were bought to unlock from AT&T’s network. Actual calculation declares that there were 1.15 million revenue-generating iPhones in play during Apple’s Q4. Based on the average selling price, he then utilizes $118 million that Apple recorded in iPhone-related revenue at the time of the quarter, estimating the exact service revenue Apple took from its share of AT&T’s data charges by subtracting his estimate of hardware revenue generated by the sale of each iPhone.

The concept is very tricky as the iPhones that were sold in June and July have obviously been producing revenue as compared to the ones sold in September, but he arrives at a figure of $18 per iPhone subscriber in monthly expenses to Apple during the time of Q4. This simply means that over a two-year contract, AT&T will pay Apple $432 per iPhone subscriber.

$400 in revenue per iPhone and uses iSuppli’s cost estimates to calculate a $565 profit per iPhone over a two-year period contract was added by Silicon Alley Insider.

Only if Munster’s assumption is correct, AT&T will pay Apple $432 per iPhone subscriber across the two-year life of the contract. Apple has a large incentive making sure iPhones stay on AT&T’s network, not mattering to Munster’s numbers being faultless.