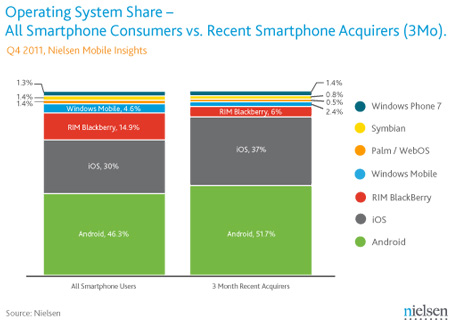 Nielsen has come out with the results of yet another survey which indicates that while Android ruled the smartphone roost during the whole of 2011, Apple has given it close competition if the fourth quarter figures are anything to go by. The sudden increase in the purchase of Apple smartphones has been attributed to the much awaited and hyped launch of the iPhone 4S in October last year.

Most recent smartphone consumers, who made purchases between the months of October and December last year, opted for an iPhone over Android handsets. While 25.1 percent surveyors had bought an iPhone in October, the figures took a leap to 44.5 percent in December. 57 percent of these new Apple device acquirers stated that they had purchased an iPhone 4S. 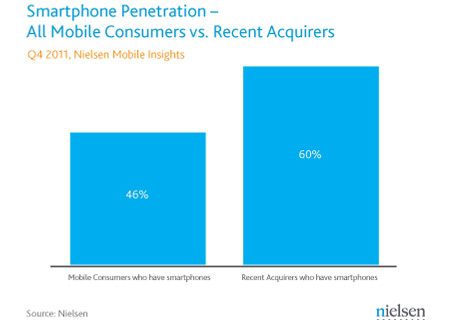 Despite tough competition from Apple, Android managed to entice 46.3 percent of all smartphone owners surveyed in the fourth quarter, all of whom said that they used an Android-based mobile phone. The findings of this study also showed the growing popularity of smartphones in the U.S. and how they have gained an edge over the standard feature phones as consumers get more tech-savvy. 46 percent of US mobile customers owned smartphones while 60 percent of those who had acquired a new device within the last three months, opted for a smartphone rather than a feature phone.

As far as the OS market share in the last three months goes, Android dominated with 51.7 percent and iOS came a close second with 37 percent. RIM BlackBerry occupied the third position with a much less figure of 6 percent.