Home Apple Apple limits iPhone sales to 2 per person and does not accept... 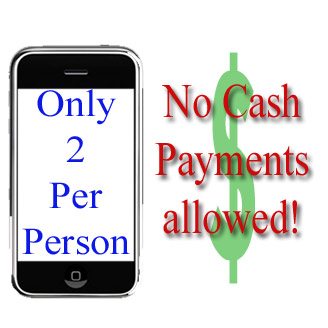 Apple has sold approximately 1.4 million iPhones since they went on sale on June 29, 2007. The touch-screen gadgets are expected to be a popular item for gifting and for self-use during the holiday season. But, if the plan is to buy an iPhone for every member of the family, it is definitely going to create obstacles.

Because, according to the Associated Foreign Press, Apple is limiting the number of iPhone sales per customer to two. This is being done in order to prevent illegal trafficking. With the new plan, the company has made new rules by not accepting cash as the mode of payment for iPhones. Apple has confirmed the reports, who already has this policy in place.

Initial to the new policy released, customers could pay cash leading to a limit of five iPhones per person. But as clearly mentioned by Apple’s spokeswoman Natalie Kerris, “Apple wants to ensure enough iPhones will be in stock this Christmas for people shopping for gifts or themselves.” But the truth believed is that the company assumes that of the 1.4 million units sold, over 250,000 iPhones may have been unlocked to work by unauthorized networks. Hence, this is just another way to restrict resellers and unlocking activity.

From the time the price on the iPhone was dropped in September, the number of unlocked iPhones has increased. The report of some people buying up to five iPhones at a time, modifying the phones with unlocking software and then reselling them to folks overseas has become common. Additionally, people are still buying the devices and using software available over the Web to unlock the phones through which they can work on networks other than AT&T’s.

At the time of earnings call this month, Apple executives believed that a quarter million iPhones have been unlocked by buyers. Apple released an iPhone update last month that renders unlocked iPhones unusable, but hackers found their way to restore some of its functions.

Besides unlocking iPhones, hackers have been working on bypassing Apple’s attempt to control access to the device’s operating system, rather than release a software development kit that would let developers build native applications for the iPhone. Apple encourages software makers to build Web applications that would run on the iPhone’s Safari browser.

This new policy is in process from last Thursday. The condition of credit or debit cards as mode of payment has discouraged unauthorized resellers. But, the policy is not applied to Apple’s online sales or to AT&T.