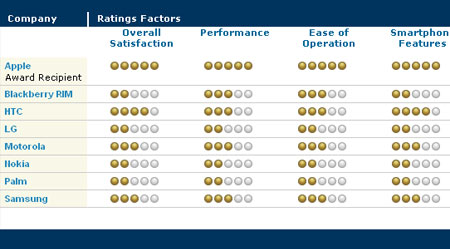 This recent study also revealed the influence of physical design over features of a handset, in determining consumer satisfaction. Smartphones that did not weigh more than 5 ounces and traditional ‘feature’ phones that didn’t exceed 3-3.5 ounces, received higher satisfaction ratings in this study. The report also clearly highlighted the power of touch, wherein solely touch screen handsets rated highest in satisfaction (817 points), on a 1,000 point scale, as compared to those with QWERTY keyboards (782), and a mix of both, touch and QWERTY (785).

“It’s not unexpected that satisfaction is higher for devices that have new technological advances or features,” shares Kirk Parsons, senior director of wireless services at J.D. Power and Associates. “Having the right combination of physical dimensions and operating functions and features for both smartphones and traditionally equipped devices is key to creating an exceptional ownership experience with each type of wireless device.”

The ‘thin is in’ fad expanded its horizons to include gadgets, as thinner phones made customers more happy than the bulky ones, revealed the study. Other areas where features scored big with the consumers were faster processing speeds, higher computer chip bit rates and advanced display screens (like Super AMOLED). Add to that, camera megapixels (5MP and above) which played quite a role, as the study recorded a direct relation between picture-video quality and user satisfaction. Use of applications on smartphones, also, considerably contributed to the consumer satisfaction department.

Apart from throwing light on the obvious that physical design plus great functions make up for the best combination in mobile phones, the J.D. Power and Associates report gives specifications that are bound to aid manufacturers. Plus, it also makes consumers consciously aware of what they look for and what they can look for when planning to get a device that will give them a complete experience.