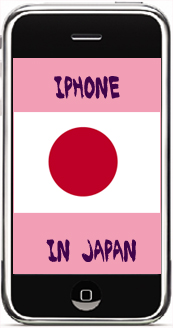 As Apple iPhone is being launched everywhere in countries like France and Germany besides the US, how can Japan be left behind. Apple is now in talks with Japan’s mobile phone carriers to introduce iPhone in Japan.

Apple and NTT DoCoMo are still in negotiating terms for introducing the iPhone as Apple wants to receive the same percentage of subscriber revenue with NTT DoCoMo like it receives from rest of its carriers.
NTT DoCoMo to discuss about the launch of iPhone in Japan.

Apple is also talking with Softbank in case the deal with NTT DoCoMo gets cancelled, then they could proceed with this other operator.

As Apple iPhone has all the features of the iPod with mobile phone features.

Apple has plans to launch iPhone in Asia. In fact, Apple has been in talks with China to launch iPhones in the Chinese market. Meanwhile, Indian consumers are also expecting the iPhone to be introduced in the country by the next year.